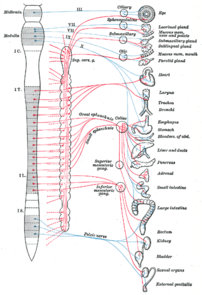 Yesterday I mentioned several health measurements one could use to chart your general health. Today I will focus on one them – heart rate measurements. This is probably the simplest and most cost effective (big bang for the buck) of all the ones I mentioned yesterday.

At first glance, it seems rather obvious the importance of a heart beat for your health. Of course once you get into the details things are more complex than the first glance of – you want to keep your heart pumping.

The average heart rate (HR: beats per minute) is around 70-75. Many of you will know that once you start getting in aerobic shape you resting HR decreases. It is not that unusual to get your morning HR down into the low 40s (some will get it into the 30s: e.g. Lance Amstrong).

Heart rate is controlled by the autonomic nervous system (ANS). There are two main branches of the ANS: the sympathetic system which is involved in energy mobilization (think increased HR), and parasympathetic system acting as the opposite and hence restoration (decreased HR). When the system is nice and healthy there is an appropriate balance between these two controllers and your HR changes according to the appropriate response to the current situation. A perfect example of this is when you exercise your HR increases to raise the meet the need of the higher energy requirement. In contrast in an ‘unhealthy’ system one of the two branches of the ANS can come to dominate which leads to various diseases, or accelerate certain diseases, with the most prominent being cardiovascular disease (CVD). Typically the unbalance occurs with an overactive sympathetic and/or underactive parasympathetic.

A person with a HR of over 90 has a three times increase in mortality compared to someone with a HR of less than 60 (Thayer and Lane 2007 review paper). But this might not be that meaningful, for while if you get into decent aerobic fitness your HR will be lower than 60, not too many people have a resting HR over 90. Now if you went from over to 90 to under 60 you can expect big gains. But I haven’t found any research that supports going from 70 to 60 or far lower has shown the same effects. This suggests that lowering your HR, while a good sign of fitness overall does not decrease mortality, but a high HR is not good and appears to increase mortality.

However, just charting you morning HR has some benefits. If your morning HR increases suddenly jumps 8-10 beats one morning, it might be an indicator of overtraining, over stress, or a cold/illness coming on (assuming you have a regular baseline in the morning).

But what about some other useful heart rate measurements. Two others you might not have heard so much about are: heart rate recovery (HRR) and heart rate variability (HRV).

Heart rate recovery (HRR) is simply how quick your HR recovers after stopping exercise. But to meaningful (and even somewhat repeatable) you need a consistent protocol. While you can measure your HRR after stopping any of your exercise sessions (I have started this), but to compare to the clinical data you have to follow the same protocol. However, the problem is that there are several different protocols used by different research labs. Some use a warm-up period, other do not, some use a cool-down protocol where the subjects are lightly working after ‘stopping’ of exercise, while others get the subjects to sit-down, or lay-down (no cool down).

Now it is thought that HRR is an index of inhibitory effect of vagal reactivation after stopping the sympathetically driven increase in HR required exercise (but there is also an inhibition of the inhibiotry activity of parasympatethic system). Hence, a healthy vagal system would induce a larger drop in heart rate. An unhealthy, imbalanced system would results in a slow HRR – heart rate not dropping very fast.

Now one problem (as far as I can ascertain) is that different researchers use different protocols (as I pointed out above), but I will try to give you the one I have found most common in the literature. But first what overall do they find? One group of researchers (Cole et al., 1999) (using one particular protocol) have defined that less than a drop of 12 beats per minute (bpm) after the first minute after you stop exercise is abnormal. As in most people drop more than 12 beats (the median was 17 bpm). The people who dropped less than 12 bpm where at a twofold higher risk of all cases of mortality (when followed up for the next 6 years). A number of other studies have found similar overall results. In a follow up (Cole et al., 2000) to the above study the reseachers examined 5,234 subjects testing HRR (but using a slightly different protocol this time, for there was no cool-down instead that subjects sat down immediately after stopping exercise and they looked at HRR at 2 minutes post exercise) and followed these patients for 12 years. In this case the cut off was less the 42 bpm recovery or more than 42. The subjects with less the 42 bpm recovery after 2 minutes of seating were 2.58 times likely to die over the next 12 years as compared to the subjects that had more than 42 bpm recovery.

There is also some controversy on reproducibility (reliability) of an individuals HRR.

Exercise protocol: The ‘standard protocol’ is a graded treadmill where the subjects go through 9 2 minute stages of increasing difficulty and the subjects are encouraged to go to exhaustion (which is defined by the researchers as 85 to 90% of a persons predicted max HR).

The Bruce or modified Bruce protocol is a ‘standard’. See link for details.

In the cool down part (start right after ceasing main exercise session and part of the time of HRR) the subjects walk at 1.5 mph (slow) at a grade of 2.5% (or sit down as used at other times by the researchers in the field). You can begin to see the problems of making sense of all of this.

What I suggest is sure go ahead and test your HRR on most exercise sessions. Simply note your HR when you are just ready to stop, then continue a slow/easy recovery (try to keep it in your mind of what pace this is to keep it consistent) and note again your HR at 1 min and 2 min after you stop your main bout of exercise. Additionally, when you can, be it once every two weeks or once a month try for a standardized protocol (either one the various papers use – or your own). Steadily build up your level of work (be it measured in watts, mile per hour, etc) until you are at near peak (you might not want to go to peak – say 90% of predicted max HR) –note your HR when you have peaked out – then go into another standardized recovery period (eg 1.5 mph on the treadmill at 2.5%) and measure your HRR at 1 and 2 minutes into the recovery period. At the very least this gives you a comparison than you can use on yourself.

Vivekananthan et al., (2003) found that HRR predicted mortality even after taking into consideration of prior severity of cardiovascular disease. This indicates that HRR is an overall measurement of your general health – not just heart health.

Next there is heart rate variability (HRR). This is a more difficult subject because again different researchers have fundamentally different ways of thinking of what variability is. Heart rate variability can be broken into time and frequency. Regarding time, though there are still many measurements of this, you can think of one as the standard deviation between interbeat intervals (IBI). As for frequency: both low frequency and high frequency spectral power have been used an indices of vagal activity.

Another way to look at these two measurement of variability is that frequency domains are an attempt to try to dissect out the excitatory (sympathetic) and inhibitory (parasympathetic) components/contributions, while the time series measurements are seeking to measure the overall chaos or complexity in the system.

As for the general take home message, people with a higher rate of variability are considered healthier and less likely to die. So at first this might sound somewhat counterintuitive for those not familiar to the heart field or chaos theory. But think of it as the more dynamic the system the better it can react to external changes.

Now until recently this measurement was only available or performed in the clinic. But there are now at least companies that I know about that sell heart rate monitors that can give you HRV measurements (polar, suunto). But if you are interested make sure you hunt out the specific models that can measure HRV (warning they are expensive: $ 300 +). In the near future I believe devices like the iphone might have similar capability – but it is not just a matter of processing power but also general accuracy of the heart measurements.

The whole HRV fundamentals and field is a harder to explain (without taking a whole thesis) but I will touch on it more tomorrow.

But similar to HRR, heart rate variability can also be used as a measure of the balance of parasympathetic and sympathetic component of the autonomic nervous system. Similar to heart rate recovery, HRV has also shown to be consistently linked with overall health as measured by mortality (for review see Thayer and Lane, 2007). The take home message is a number of time and frequency measurements of HRV can be used to predict mortality.

So to sum it up and try to keep it simple:

1) resting HR (preferably measured in the morning) can give you a general health measurement – and while not that predictive of mortality can give you a guide if your aerobic health is improving and a measure of if you are recovered.

2) Heart rate recovery (HRR) simply measure your HR at end of exercise and 1 and/or 2 minutes after you start your cool down. See if this improves or not. Additionally, try a standardized protocol for best reproducibility 1 or 2 times a month. Write these numbers down.

3) Heart rate variability (HRV). If you can afford the more expensive gadgets get a heart rate monitor that can measure HRV.

Exercise is the key here (no surprise), because exercise is well known to decrease your resting heart rate, but also it increases HRR. And, though not widely know exercise can also increase HRV, which is another good predictor of the overall health of the system. (Gamelin et al., 2007) 12 weeks of exercise was shown to significantly increase HRV. Great news. Unfortunately, the same researchers found that as little as two weeks after stopping training (detraining) reversed this effect. The trick is do your best to stay consistent. I have a piece I am writing about consistency in general – but in the mean time here is a very good post by Alan Couzens. So get out there and exercise.

What is also interesting, but maybe not so intuitive is that researchers are finding that imbalance in your autonomic nervous system, which can be measured by sophisticated anaylsis of heart rate variability (and HRR) can give you insight into pain tolerance, mental health, immune system and more. Tomorrow, I will do my best to step into this topic.

6 comments for “Heart measurements for your health”