Through my various scattered readings I thought I had found a link between obesity and going into debt due to neuro-chemical changes in the brain. Two new reports prompted me to re-ponder the link at the population level between the rise of obesity and the rise of consumer debt.

CDC (center of disease control and prevention) released the latest obesity numbers (2007) here. One of their own objective as part of “Healthy people 2010” project is to reduce the percentage of obesity to 15%. Well, only one state even fell intoÂ  the range of 15-19% obesity, which was Colorado at 18.7%. It looks like there is a lot of work (exercise) ahead if America has any hope of reaching this goal by 2010. I personally do not believe even one state will reach this goal let along all 50. The data supports the opposite, as 45 of the 50 states obesity rate increased. Overall, the obesity rate increased to 25.6%, which is 1.7% higher than 2 years ago. Wrong direction. The other startling fact which I did not know is this set of data is gathered by phone interviews and use ‘self-reported’ weight and height. CDC understands the potential problem with self reported weight and height and therefore estimate the real obesity rate is more likely to be 34% (as reported here). Add the percentage of overweight adults to the 34% obese and you are in the range of greater than 66% (see here). Below is one graph that I found that show the obesity trend over time.

Now let us switch gears and look at consumer debt.

NY times had a piece this weekend on the rise of consumer debt. You can see in this interactive graph on the NY times site the the ratio of savings (beige – top of graph) versus debt (blue variations – bottom of graph) is not going in the right direction (though I am sure some economists could come up with an opposite argument). 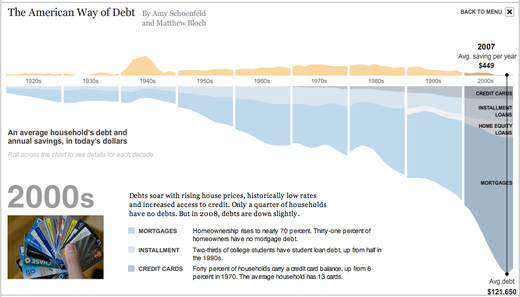 What is interesting for this blog piece is what appears to be a nice correlation between the rise of obesity and the rise of consumer debt (and reduced savings).

Does a full stomach, increased fat storage, and all the subsequent (and possibly changes that occur in the brain prior to the increase of fat storage – potential cause) changes that occur in the brain (I will go into the details in another piece) make the body/brain feel ‘full’ and hence no need to ‘save’ for a rainy day because the ‘store’ is full? Can you afford to spend (and borrow) at an almost unlimited rate if your body/mind is telling you that you are ‘rich’, that you are in the time of plentiful?

There does appear to be a strong correlation between the rise of obesity and consumer debt – but that does not mean the link is causal. But I will in the future start outlining the potential biological link between the brain changes that occur to induce obesity and/or the changes in the brain that occur with obesity that could influence economic choices.

Can you hack your body/mind to make better economic choices?

6 comments for “Rise of obesity and rise of consumer debt – a link?”