Can we look at the history of some leading diseases to get an indication of the potential breakthroughs in longevity research?

Aubrey de Grey, one of the leading drivers of longevity research, approach to longevity will be discussed in the concluding section of this piece in reference to the rest of this blog piece.

(all data is from the American Cancer Society and/or National Cancer Institute unless otherwise specified). Additionally, all data presented below in this piece is age adjusted rates, meaning we can compare across time despite different demographics from different eras.)

I am going to pick cancer to examine in more detail.  Cancer not only is the second leading cause of death, but also males have a 1 in 2 probability of developing cancer in their lifetime, while women are 1 in 3. So this disease affects most of us or someone we love. I have done a little bit of a background check to see how science has fared in treating this terrible disease over the last 50 years, or so.

(I am also reporting the cancer results of America, which according to recent data has the best cancer survival rates in the world, which means the conclusion might be worse for the rest of the world).

Now every week we are told of a new cure for cancer, a new breakthrough in cancer research that is going to save millions of lives. And we are also told that the survival rate of cancer X has improved ‘X’ percent in the last 10 years. Therefore, we must have huge decreases in cancer death rates over more than the last 50 years. In 1950 we hadn’t yet discovered DNA, not to mention sequenced the entire human genome, and started the whole biology revolution in research.

I am not even sure if this is a statistical difference? A 5.2% improvement in cancer death rate over the time of 55 years.

And possibly even more interesting if you look at the 2002 data and compare with 1950.

So even if you skip all the basic advances we have made in molecular cancer research over the last 50 years, all the new treatments, etc, then just think of all our new advance screenings that we perform now, that we certainly did not do in 1950: pap test (papanicolaou test), PSA testing for prostate cancer, breast mammograms. Just the advanced screening should make a huge difference because all the cancer experts agree that the main key to treating cancer is catching it early. It could be argued that the small improvements we do see is all due to early diagnoses (screening and awareness), and nothing to do with actual better medical treatments, more research, new treatments, etc. Then why with the access of these new early screening tools, and far better public awareness why aren’t we seeing huge reductions in cancer death rates?

First we need to examine the leading types of cancers and which are the deadliest cancers. All the cancer groups when reporting this data put in the caveat of excluding non-melanoma skin cancers ( which is roughly 5 to 6 times higher incidence than breast or prostate, but very low death rate) so if we exclude then the leading new cases of cancer types are (again listing the big 3):

And the big 3 are also among the most deadliest, as I list the percentage of total cancer deaths by these three below.

A NY times graph probably gives you a more intuitive image of cancer types and deadliness (click on any of the graphs for a higher resolution image).

So to address cancer death rates one has to take into consideration the big 3, and in particular lung cancer because it has nearly 2 -3 times higher death rate than prostate or breast cancer.

One argument for the lack of large drops in the cancer death rate is a small but continuous increase in cancer incidence as depicted in the graph below (from 1975 onward). 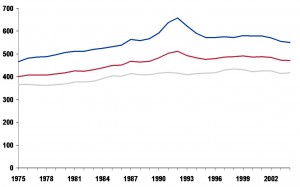 The blue line is for male cancer incidence (per 100,000 age adjusted), the gray bottom line is female rate, and the red line represents both sexes. You see a general increase, but with a unusual blip in the male and combined sex lines between 1990 and 1993.

So let us look at individual trends in males and females as depicted below.

The red line represents prostate cancer incidence rate (per 100,000), while the blue and green are lung and colorectal respectively, which are decreasing.

You can see a large increase in prostate (red) cancer incidence, which then then falls back down before remaining relatively constant. The prostate cancer incidence mirror the overall cancer rates in males (blue line) in the previous graph. This suggest that new technology such as PSA screening and doctor and public awareness was catching more cancers that previously determined. A newscientist article reports that in 2002 1/3 of PSA detection of cancer in older males would not actually  cause symptoms in their lifetime, while the majority of these subjects would still  undergo cancer therapy. And there is an ongoing debate on the accuracy and usefulness of PSA testing. 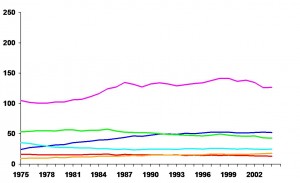 The purple color represents breast cancer which is increasing slightly, along with the blue line – lung cancer, while the colon and rectum cancer (green line) incidences are trending downwards.

(I am leaving out discussion on possible environmental causes of the increased incidences of cancers for this blog piece).

But since lung cancer has a relatively high incidence and the most deadly of the most prominent cancers it plays a large role in the overall cancer statistics so we should examine this form of cancer in more detail.

For this I offer these graphs that go far back as 1930 and report cancer death rates for multiple cancers. 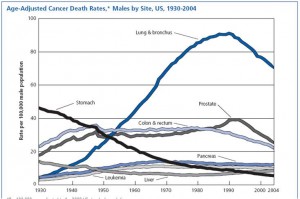 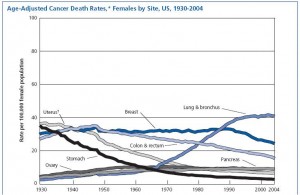 What these graphs displays in an increase in lung cancer for males until around 1993 then a decline, while female lung cancer rates rise about the same year then levels off. Therefore, behavioral trends in humans, such as smoking might be playing an important role and we should explore this possibility. 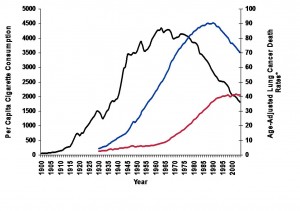 Now we know that females in general took up smoking at a later time period than males and the death rate from lung cancer are offset in the sexes so we should look at the sexes separately. And if we look at data for the separate the sexes for smoking prevalence since 1965 as depicted below we can learn a few more things. 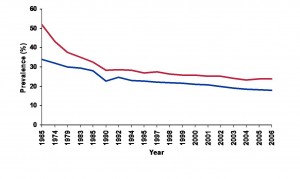 From this graph we can see that since 1965 there is a decrease in smoking prevalence in both sexes. Therefore, given the 25-30 year delay from smoking behavior changes and cancer death rates from lung cancer we would expect to see a drop in both sexes starting at say 1995 onwards. We do see this for males but have yet to see it in the female population.

An equal argument can be made that the 1950 death rates are relatively low because the 25-30 year lag had not shown up in the rising rate of smoking that occurred from 1925 to 1950. And the 1950 cancer rates are largely determined from the level of smoking in 1920-25. And this is a valid argument, but it also points to the fact that behavioral changes have far larger influence on cancer death rates than our medical advances.

So one way to approach the potential confounding variable of tobacco use is to eliminate it from our analysis.

But the bottom line is over 70 years it is hard to argue we are not much further ahead in overall cancer death rates that seem disproportional to the advances we have made in biological science and more specially cancer research.

Cancer is the second leading cause of death in humans, so it appears to me that if we are going to make any significant improvement in longevity and/or more healthy years we would have to make large strides in reducing cancer death rates (but see below).

However, despite all the vast sums of money and time spent on the fundamental basic biology of cancer, and all the clinical studies we have made very little, if any, real progress in cancer death rates over the last 50-70 years. Additionally, think of all the advances we have made in screening, awareness and early diagnoses of cancer over the last 50 years. They could easily account for the little improvements we might observe, but then again you would ask why not better? Then you have the weekly announcements of new cancer treatments that we have seen for the last 30 odd years – where are the results?
It is actually hard to believe the lack of results.

Now, with this all said we have made some progress in heart disease from 1950 to the current time, though if you look at the limited amount of research from 1900 we might have not had any improvements from 1900 to  the year 2000 (suggesting lifestyle and environmental factors). But there is no argument that we have a longer lifespan now compared to 1950, but this is largely due to reduction in death during childbirth (for both child and mother) and reduction in death in childhood. Vaccination for common childhood diseases and antibiotics have probably had the biggest contribution to the increase in lifespan, and it is open to debate if we have made any gains on the other end of the lifespan spectrum.

Aubrey de Grey, also points out the lack of success of the single disease paradigm (discussed in these video links: via PIMM , TED talk, and this google talk). His argument is we have to get at the core of the problem, but isn’t this similar to the molecular cancer researchers approach? Specifically, Aubrey argues that the gerontology approach that tries to stop the damage, by usually altering the metabolism, or the geriatric approach which tries to reduce or halt the pathology that results from the initial damage might not be the best approach. He believes an engineering approach concentrating on the damage might be a better approach (see his video lectures).

I think Aubrey would argue that the cancer results over the last 50 – 70 years can not tell us much about the possibilities of his approach to longevity. But I still think that if we are going to have fundamental advances in longevity we are still going to have an appropriate level of molecular biological manipulation that is similar in principle as treating cancer (to the point that we reduce cancer death rates).

I wonder if we can not made huge strides in cancer death rates then what are the hopes for meaningful progress in longevity research?

Now the argument that usually occurs at this point is that only now do we know enough at the biological level to come up with real breakthroughs. But this is the exact same line we have been told for at least the 30 years of my memories. The new breakthrough, the new cure is heralded yesterday, today, tomorrow – but then 1, 5, or 10 years later nothing has changed (based on the cancer results).

I hope that this time we really are at the threshold of fundamental breakthroughs that result in reduced death rates from cancer, but also all other diseases. But if you want me to believe you that this time is different from all the other times – show me the results.

← Heart rate variability: health predictor and what you can do about it.
The new hourglass II is up at Ouroboros →

5 comments for “Can our track record in cancer research give us a hint of what we can expect in longevity research?”