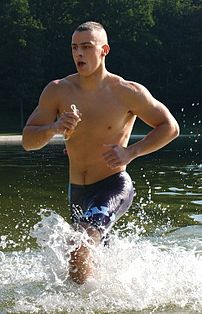 Yesterday, I wrote a piece about a recent paper that found that runners had a higher survival rate and a lower rate of disability as they aged compared to non-runners. While I had a few problems with the study in the end I agreed with the authors conclusions (mainly a problem of running long term longitudinal studies).

But I want to go back to one important point:

How much did they exercise:

In 1984 the completers in the runners group were running 4 hours per week, while the community control group averaged 25 minutes (not yet separated into ever-runners and never runners), but the total aerobic exercise for the two groups were: 5 hrs and 7 min. versus 1 hour and 40 minutes. If we break them into ever-runners and never runners: running 3 hrs 21 min. vs 0 hours 2 min. and for total aerobic exercise: 4 hrs 32 min. vs 1 hr 7 min.

Now this is just one way to break it down, of course you could run 30 minutes a day 3 times a week then on the weekend go for a longer run of 3 hours (marathon training). You can obviously combine different types of exercises. But still 45 minutes a day, 6 days a week gives you a pretty good idea of the dedication involved. And this is the average for all year. Now many of you during the summer may reach these goals when you add up the weekend hikes, those family bike rides etc. But the problem is many of you have a fair bit of drop off when the bad weather comes. You figure that you are still getting plenty of exercise but I suggest you track it and see if it adds up to 4.5 hours per week and averaged over the complete year.

If you want to increase your chance of surviving to an older age and have reduced disability so you can continue to enjoy life make sure you get plenty of vigorous exercise.

45 minutes a day of vigorous exercise 6 days a week should be your goal 52 weeks a year (or at least average this).

Break it up over the week any way you see fit in whatever form of exercises you like – but make sure you do it.

← Keep moving for greater health and longevity
The age of Olympians →

1 comment for “45 minutes of vigorous exercise 6 days a week 52 weeks a year to increase your survival rate.”