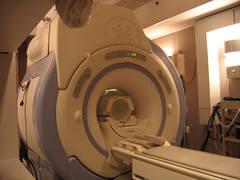 Is web surfing good for your brain health?

Many of you reading this might be happy to hear the results of this new study as reported at esciencenews.

The researchers at UCLA (in press at American Journal of Geriatric Psychiatry) compared reading and surfing the internet in 25 subjects between 55 and 76 years old. During these two tasks the subjects brains were scanned using fMRI. The more interactive endeavor of surfing the internet ended up activating the frontal brain regions which are involved in decision making.

Internet searches revealed a major difference between the two groups. While all participants demonstrated the same brain activity that was seen during the book-reading task, the Web-savvy group also registered activity in the frontal, temporal and cingulate areas of the brain, which control decision-making and complex reasoning.

This is an interesting result and I am not sure you would see this in a younger group of subjects because even the lowest level of web surfers are pretty savvy. But if you have watched an older generation family member who did not grow up with the net, or adopted in when it came into general use, they seem lost when on the net – partially scared of doing something wrong, but just in general not fully using the tool to even a small percentage of its ability. Though I think anybody can adapt to get good use and hence probably good brain activation from surfing on the net.

As Small, one of the authors pointed out:

…the minimal brain activation found in the less experienced Internet group may be due to participants not quite grasping the strategies needed to successfully engage in an Internet search, which is common while learning a new activity.”With more time on the Internet, they may demonstrate the same brain activation patterns as the more experienced group,” he said.

All of this makes perfect sense to us surfers. If we were guessing the results before this experiment and comparing say TV watching, reading, and surfing; we would guess that TV watching would have the lowest activity, followed by reading, then internet surfing.

Compared with simple reading, the Internet’s wealth of choices requires that people make decisions about what to click on in order to pursue more information, an activity that engages important cognitive circuits in the brain.

Now I am not a gamer but it might be reasonable to propose if gaming was included as a comparison that it would produce an even greater range of activation.

Either way, surfing the net because it engages the frontal lobe via decision making (compared to passive intake of information) might be a good exercise for your brain and keep it nice and healthy as you age.

Hmmmm maybe my last 10 years haven’t been a total waste.

Update: check out – Reading and your brain.