I have previously written a few times about how quickly deconditioning of aerobic fitness occurs after an exercise layoff (see here and here), but what about brain health?

I have a perfect reason for writing this new piece because with my recent travel schedule (multiple cities, multiple meetings, etc), busy conferences, and maybe an extra busy social calendar has combined to halt my running over the last two weeks (this is really not a good excuse for I saw many neuroscientists up in the early morning running before the conference started as I walked to the conference centre). The question then is how much aerobic and brain deconditioning occurs?

Aerobic fitness declines after a layoff (no aerobic exercise)

Alan Couzens writes in his blog piece – with supporting data from scientific papers – it takes considerable time to recover that lost fitness after even a short lay off (not to be confused with tapering) – and hence it is best to stay consistent. A one to three week layoff results in 25-30% drop in actual performance. Even one week of no exercise results in a 50% drop in mitochondria (your energy producing engines)  and it can take 4 additional weeks of training to bring those mitochondrial numbers back up to where they were before the layoff (and hence performance).

Brain fitness after a layoff (no aerobic exercise)

What about the effects on brain health after a physical exercise layoff? There is not a lot of research on this subject but several papers are quite fascinating.

Many papers have found that with running the amount of brain-derived neurotrophic factor (BDNF) is increased in several brain regions (the hippocampus is usually studied) and reported to increase neurogenesis (a good thing) and be involved in reducing symptoms of depression. In general BDNF is very good for your brain health (I should write a blog piece on this important brain health protein). 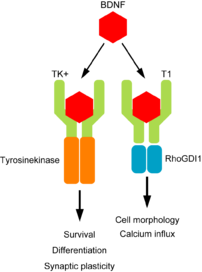 But what happens when you stop running? Widenfalk et al., 1999 reported that when you stop running BDNF drops – with a trough occurring 5 days after stopping running (and still lower at 10 days). And even 30 days after stopping the BDNF levels in the CA3 region of the hippocampus region while not statistically lower (at a 0.05 level) appears to remain lower than the levels prior to stopping running. The good news though is that even at the lowest levels BDNF is not lower than prior to starting running. Therefore, even after 30 days of no running the prior running animals BDNF levels remained higher than before they started running (they also saw the same overall results for the receptor for BDNF which is called TrkB or TK+ in the image).

Additionally, exercise also increased neurogenesis in a recent human study, which is presumed to be mainly due to increase of BDNF (Pereira et. al., 2007) (in reality they only used a correlate measurement of neurogenesis which the validated in a mouse model – but it is the best they can  do for a human study).

In a more recent paper (Radak et al., 2006) using swimming (5 times/week, 2 hr/day, for 8 weeks) and found the typical increase of BDNF with exercise. However, after 6 weeks of detraining BDNF levels (measured by a more sensitive assay than the above paper – ELISA) on the whole brain were below the pre-exercise levels. Another brain trophic factor (nerve growth factor – NGF) also fell after detraining to levels below the baseline pre-exercise period. The memory improvement effect which occurred with exercise was also lost with the cessation of training.

Okay, this doesn’t sound so good – BDNF dropping to levels lower than before you started running. This could be related to the ‘depressed’ feeling people experience when they stop running (be it due to an injury or other situations) – though many other molecules including possibly the immune system may be involved.

However, there is also some good news.

In this paper it took between 7 and 14 days of non-running for BDNF levels to drop to pre-exercise levels (they didn’t look at longer time periods to see if they would drop below pre-exercise baselines as the above study).

But the most interesting part of this paper is when they re-introduced exercise to the animals after a two week layoff (just like my current condition). It only took 2 days of running to increase BDNF levels – where normally it took 14-21 days. There was a slightly better effect if the animals where doing daily exercise compared to alternate days. But the real message here is that there appears to be a ‘molecular memory’ of your previous running – a conditioning of the system – so when exercise is re-introduced the positive effects occur far earlier.

Yes, try to be as consistent as possible with your exercise program. A two week total lay-off will result in considerable aerobic fitness loss that requires possibly 4 weeks to recover back to your previous levels. However, in regards to BDNF (which may help your mood, memory, and brain plasticity) as little as two days of exercise will result in a re-introduction of increased BDNF levels.

With that said I managed my second run since getting back home – hopefully the BDNF is kicking in – we all need our daily dose of BDNF.

So if you have an extended layoff it is not all bad – get out there and get all the brain health benefits of exercise and it will only take a couple day of exercise to get back up to your old levels, yippee!

← A personal example of human irrationality by a neuroscientist
What are the criteria for a good scientific meeting performance ? →

1 comment for “A layoff results in aerobic deconditioning what about the brain?”