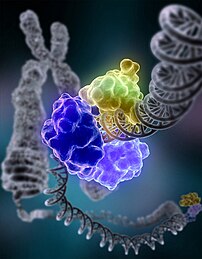 A new paper just out in Cell by the Sinclair group gives us some intriguing but sobering information about aging and genomic integrity.

The new twist to the ever evolving story is the Sirt1 protein might have at least two primary roles in the cell. The first role is to locate itself on DNA to inhibit these particular genes that it is situated on for they are not needed by this particular cell at this time. The second role though is to help repair DNA damage caused by such things as oxidative stress. Sirt1 leaves its original location in which it was suppressing specific genes to where the DNA is damaged and hence they are no longer doing their gene suppressing job.

As the short review article in Science pointed out – this is a catch-22 situation (the catch-22 of aging).

In the paper when they induced oxidative stress there was a Sirt1 dependent dsregulation of gene expression – which resembles that of an aging mouse brain (see below). With the oxidative stress Sirt1 was relocated (from its original sites of action) to the DNA double-strand breaks. If Sirt1 was reduced there was less efficient repair of these DNA breaks. Interestingly, overexpression of Sirt1 repressed 85%  of the formerly deregulated gene expression.

Next the researchers irradiated mice to induce cancer in a specific mouse strain prone to developing cancer (p53 +/-) and found the Sirt1 activator resveratrol if fed 3 weeks prior to the irraditation increased survival by 24%. Since resveratrol might not be just working through increased Sirt1 activity they used a transgenic aniamal that allowed temporal and tissue specific overexpression of Sirt1. A 2-4 fold increase of Sirt1 expression in bone marrow lymphocyte progenitors and mature B and T cells was induced 2 weeks prior to exposure of the mice to irradiation. Survival in the Sirt1 induced animals increased by 46%. Finally, they found that overexpression of Sirt1 in the mouse brain could repress the age related deregulation of certain genes.

I am only give you brief outline of the paper, I encourage you to read the full thing if you are a scientist for even if this is not your particular scientific interest it is thorough and involves many interesting techniques.

Aging could be a catch-22 situation – Sirt1 steadfastly performs its normal function of suppressing inappropriate gene expression but when there is DNA damage it abandons the castle to fight off genomic instability – but at the cost of deregulation back on the home front. However, overexpression of Sirt1 (via resveratrol and/or more direct genetic manipulations) can at least partially rescue the adverse affects of the accelerated irradiation induced ‘aging’ (genomic instability – increased cancer). Think of it as if you have enough soldiers you can both defend the home castle and fight wars in far off lands (though I am not a big fan of war like analogies).

Remember dietary restriction (in the form of calorie restriction or every-other-day fasting) has been reported to increase Sirt1 expression and dramatically decrease the incidences of cancer (tested numerous ways including radiation induced cancer), and increase genomic stability. Sounds famliar doesn’t it.

← Exercise for healthy new neurons: even in middle age
How playing the court jester can improve your brain →