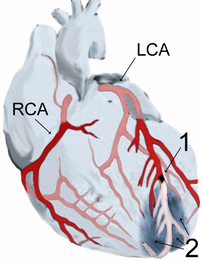 Dietary restriction, in its various forms (the two main forms are a 30-40% reduction in calories called calorie restriciton (CR), and every-other-day fasting (EODF)), increases lifespan in a wide array of organisms (we have known this since the 1920s). More recently, researchers have examined the possible use of dietary restriction for various ‘injury’ models.

In the late 80s early 90s Mattson’s group (or here) discovered that one form of dietary restriction, every-other-day fasting (EODF) in which animals consume no calories for 24 hours followed by 24 hours of as much food as they want, if followed for 8 weeks prior to a chemical induced injury of the hippocampus was neuroprotective and resulted in better behavioral recovery. Latter they went on to find that calorie restriction was not neuroprotective but EODF was, in one of their chemically induced brain injuries.

The group went to explore several injury models that included stroke and myocardial infarction (heart attack). However, it is unlikely a large population of humans will adopt EODF prior to an ‘injury’ for the chance of having less damage from various possible injuries.

But the most dramatic results yet came from a paper that became available yesterday.

Katare et. al., 2008 examined the use of every other day fasting started 2 weeks after permanent occlusion of the left coronary artery – this is a model of chronic myocardial ischemia.

The two leading causes of death in humans (in developed countries) are cancer and heart failure (and think of what will happen with our current obesity epidemic). The 5 year survival rate for heart failure is only 50%, which is similar to some cancers.

Katare et. al., induced myocardial infarction by permanently ligating the left coronary artery of male Wistar rats. The sad truth is that 47% of the animals die within 24 hours. For all the animals that survived to two weeks they were divided into two groups – one group was fed normally (control group), the 2nd group was given food every other second day and hence went through a 24 hour fasting period every 2nd day.

The group also measured vascular endothelial growth factor (VEGF), brain-derived neurotrophic factor (BDNF), and hypoxia inducible factor 1 alpha (HIF-1-alpha) and reported an increase in the EODF group compared to controls, along with increased capillary and arteriole density (as you would expect with an increase in VEGF and HIF-1-alpha).

But all of this might seem boring, or at least pale to the result that most of us would care about if we have a heart failure – which is survival.

The survival rate at 100 days post hear failure was 23% for the control group and an astonishingly 88.5% for the every other day fasting group – a highly significant difference. Nearly 4 times greater survival rate (3.847 times to be exact). Just check out the graft. 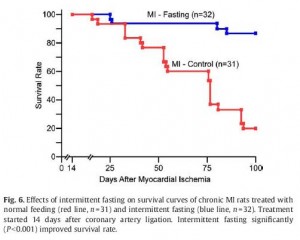 Just ask yourself which group would you like to be in?

The major weakness of this study was they used relatively young animals and I would hope they will try the same experiment in an age range that would approximate middle age in humans.

Now if these results can be replicated – and tested in other organism that might be closer to the human situation (e.g. pig) (and in more appropriately aged animals) this could be an easy to implement and safe treatment (reduced complications compared to many other potential treatments – not to mention EODF in general extends the lifespan of healthy animals) that could save millions of lives.

Note: the dietary restriction form of every-other day fasting was not started prior to the induced heart failure, or even right after heart failure – but two weeks after the heart failure occurred and there still was a dramatic increase of survival rate.

← Is the glass half full or half empty: optimism and rACC activation
Use of statins bad for myelination – possible long-term consequences →