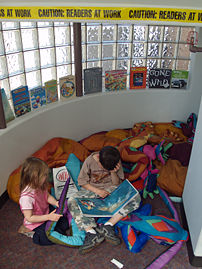 Most of us take reading for granted but in the grand scheme of things it is a fairly recent invention and skill of humans. Even in our modern times according to UNICEF the illiteracy rate worldwide is 20%.

If you go back only as far as 1841 in developed nations like England 33% of men, and 44% of women were unable to write their own name (via wiki). So you can only imagine what percentage of people say in 1000 AD could read and/or write. And there are also various level of reading ability, not only in the terms of speed and comprehension but also in the basic ability to read silently.

I came across this interesting story about the development of silent reading while reading the 2009 Edge question, which I blogged about yesterday. Barry Smith on the Edge website tells the story of St. Thomas Aquinas (1225 – 1274) astonished his colleagues with his ability to read silently.

Here, I am reminded not of the recent past but of a huge change that occurred in the middle-ages when humans transformed their cognitive lives by learning to read silently. Originally, people could only read books by reading each page out loud. Monks would whisper, of course, but the dedicated reading by so many in an enclosed space must have been an highly distracting affair. It was St Aquinas who amazed his fellow believers by demonstrating that without pronouncing words he could retain the information he found on the page. At the time, his skill was seen as a miracle, but gradually human readers learned to read by keeping things inside and not saying the words they were reading out loud. From this simple adjustment, seemingly miraculous at the time, a great transformation of the human mind took place, and so began the age of intense private study so familiar to us now; whose universities where ideas could turn silently in large minds.

I was fairly astonished by this story. It was only fairly recently that even a few people could read silently. I took this skill/ability for granted. Though with a bit of thinking I shouldn’t have as I remember one friend even after graduating from high school could not read without moving his lips. Yes, he was silent but his lips would have to move to be able to read.

In a very interesting article by Adrian Hon talks about the present decline of reading. Pointing out the rise of videos, youtube, etc. How less people read, or want to read, and they receive their information via videos.

Interestingly, the article points our powerpoint slide presentation are usually spoken at 100 words per minute, audio books at 160 words per minute (though I have explored the technology of speeding spoken audio by 1.4x which works well but you are still under 250 wpm), conversation occur at 200 words per minute (but at lot of fairly useless words are included, which you would not see such high occurrence in written works (e.g ah, ahms, so, etc). But the average reader can consume 250-300 words per minute.

And the advantages of reading over listening might be even more important when you think about comprehension as pointed out by Adrian:

The informational density of writing is only half the story. The other half is in the unique ability of the written word to construct and convey complex intellectual ideas. The very persistence of a word on a page (or a screen) allows a reader to take their time to read, consider, and re-read arguments at their own pace; spoken words sweep you along in time, only able to rely on the listener’s short term memory, not the perfect memory of the page.

Now in the past I have argued the possible benefits of listening to audio books when trying to increase your efficiency as you can listen while doing other tasks such as certain mundane work tasks that requires your hands or while exercising. But I agree with Adrian reading provides more flexibility, the ability to scan, to quickly reverse and re-read, and I just plain have better comprehension when I read something compared to listening.

Adrian argues about the current decline in reading, but also points out it is hard to quantify the amount of reading that happens on line. I know that I read even more than I did before the net came to the public, mainly because I have access to far more interesting information. I am exposed on a daily basis to new information. I would estimate that I consume more information in 2 weeks than I did in an entire year before the net (and before access to the net I was a constant consumer of current magazines, books, and wandered libraries in the hope of finding something new and inspiring).

As an example, yesterday I was reminded via a feed that the 2009 Edge question came out sometime after noon. I downloaded and saved the 101,000 word article (FYI: a typical novel is about 100,000 words long). Over the next series of reading intervals I read the piece (complete with highlighting and a bit of note taking if I got a new idea for a blog piece) in just under 5 hours. Rounding the math my average reading speed was 335 words per minute. Now this was fairly easy reading for me since I was familiar with much of what the writers were discussing. In the pre-internet age it would be unlikely I would have been exposed to so many new ideas in one day. Not to mention the very next time I could find something just as interesting – be it from several different websites, or new scientific articles, etc.

One of the common themes in the 2009 Edge question was that many people predicted the ability to directly read thoughts, the narrative flow we all have in our heads, would be accomplished and “change everything.” There were various versions of this same idea: from the simple ability to put your thought down on ‘paper’, to having a form of telepathy, a connection with whoever you signed up with (with their aggrement of course). Think of super-twitter I guess. I won’t go into further detail – go check it out for yourself at the Edge.org. You don’t have to read them all in one day – take your time and enjoy the brain stimulation.

The ability to read has transformed humans, silent reading quickened this pace, what will be next?

← What will change everything?
BIL conference – a TED alternative. →

2 comments for “Reading and your brain: past, present, and future”