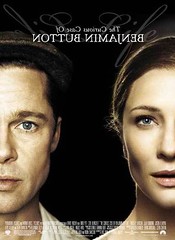 I was fortunate enough to watch, “The Curious Case of Benjamin Button” a couple times a few days ago, and at many levels (too obscure to explain) it made me ponder.

Art in it various form was invented by humans for many reasons. It allows us to be creative, but more importantly to convey our feelings and hopefully to teach. Now there are many theories out there about story telling, and I have several of my own. But all theories can be swept aside if the art touches you emotionally.

I made a promise to myself after hearing about the suicide of David Foster Wallace early this fall that I would re-read his epic Infinite Jest by the end of 2008. I finished the 1000 page plus (466,000+ words) novel on December 31, 2008. And as it did 8 years or so ago, I think reading this book has allowed me to become a slightly better person, more understanding, more empathetic.

Similarly, with watching The Curious case of Benjamin Button I think it gave me the potential to grow, to change. It might seem silly that a movie can actually change you – or at least give you a different perspective on life – but that is the whole point of art.

From close to the end of the movie from a letter that Benjamin has written to his daughter (though obviously it can be applied to us all):

BENJAMIN BUTTON’S (V.O.)
“…What I think is, it’s never
too late…or, in my case, too
early, to be whoever you want to
be…There’s no time limit, start
anytime you want…change or stay
the same…there aren’t any
rules…We can make the best or
worst of it…I hope you make the
best…I hope you see things that
startle you. Feel things you
never felt before. I hope you
meet people who have a different
point of view. I hope you
challenge yourself. I hope you
stumble, and pick yourself up. I
hope you live the life you wanted
to…and if you haven’t, I hope
you start all over again.”

Life is all about hope and change.

It is not about material possessions, as Benjamin says this as he departs on a trip that changes him:

BENJAMIN BUTTON’S (V.O.)
(after a beat)
I left with just the clothes on my
back.

Go out there and live your life, be open to change.