Previously, I have written about a few of the 2008 science breakthroughs (here and here).

The ability to build cheap microscopes and adapting them into cell phones may lead to many lives saved in the future. Granot et. al., 2008 (freely available) point out the need for cell phone based medical imaging, as 3/4 of the world does not have access to medical imaging.

The Blum center for developing economies is working on cell phone telemicroscopes, which will allow doctors to remotely diagnose a number of disease. See video below.

Very similar, another group from UCLA is working on a cell phone prototype that is capable of detecting HIV and malaria, as well as the ability to test water quality (see Clean water 2008 health breakthrough).

Finally, as covered in wired, a group from Caltech have produced a lens-less microscope that will only cost $ 10 (the group published their finding in a 2008 PNAS paper). This technology would allow very low-cost high-throughput testing of numerous diseases. Changhuei Yang, the inventor of this new type of microscope, foresees his technology could be engineered into a cell phone and help identify numerous diseases in third world countries. 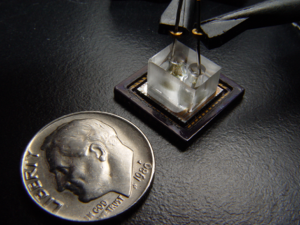 Here are at least three different groups that are advancing quickly on cell phones with an embedded microscope to detect various diseases. The ability to provide low cost medical imaging to the third world has the potential to save many lives, and hence I think it deserves acknowledgment as one of the 2008 breakthroughs in science. Now I hope this technology can get implemented in 2009.

← Antidepressants – do they increase or decrease your life span?
Simple time hack →