Being overweight (and/or fat, obese) damages your brain, lowers your thinking ability 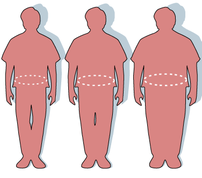 Do you want a properly working brain - then don’t become overweight (now you don’t have to read the rest of the piece). You are your brain, or at least it is the one thing you can not afford to lose. New research indicates that being overweight is related to reduced cognitive ability.

While some recent papers I have been reading indicates to me that being overweight (BMI 25-29.9) or even obese (BMI 30+) does not cost you that much in terms of earlier death (Fontaine et al., 2003, Pischon et al., 2008) (I will try to cover this more fully in another post) however, you may forfeit a fully functional mind.

Volkow et al., 2009 studied 21 healthy subjects who had BMIs in the range of 19-37, with 3 subjects in the obese range (BMI 30+). The researchers found that a significant negative correlation (relationship) between BMI and reduced activity (as measured by metabolism) in the prefrontal cortex, when the brain was at rest (baseline). What this means is the higher your BMI the less active the prefrontal cortex is. The prefrontal cortex is the part of your brain responsible for controlling higher cognitive function (planning - thinking).

But more interesting is that the baseline metabolic activity level associated positively with a number of mental performance measurements (memory as measured by the California Verbal Learning task, and executive function via the Stroop interference task, and Symbol Digital Modality test).  Therefore, the subjects with a high baseline prefrontal cortex metabolism (smaller BMI) performed the best on these mental tasks. At the opposite end of the spectrum, the high BMI individuals with low prefrontal baseline activity performed the worse on excutive function and memory tests.

Interestingly, during the cognitive tasks there was no correlation between prefrontal brain metabolism and BMI or performance on the mental tasks.

While one of the short comings of the above paper is the small number of subjects, several other papers with large number of HEALTHY subjects have found similar trends of high BMI related with reduced cognitive ability (Sabia et al., 2009 n = 5,131, Gunstad et al., 2007 n= 408). Interestingly, Sabia et al., 2009 not only found overweight individuals (BMI 25+) but also underweight people (18.5 or less) had reduced cognitive ability in late middle age compared to ‘normal’ weighted individuals.

The consistent finding among these three studies is the executive function is reduced as the BMI increases, even in otherwise healthy individuals. Executive function (thought to mainly be controlled by the prefrontal cortex) measures your general cognitive ability - planning, cognitive flexibility, abstract thinking, initiating appropriate actions and inhibiting inappropriate actions - or you could executive function just call this plain old thinking. This reduced executive ability in the overweight individual could play into my theory of American’s weight gain could be tied into the rise of debt (I will follow up on this theme in the future).

Increase BMI related to reduced gray matter in the brain:

Adding to the overall gloomy picture is a study of 1,428 healthy individuals in which the researchers found high BMI correlated with reduced brain gray matter in men (Taki et al., 2008). They found no relationship between BMI and gray matter in women, and go onto to speculate the higher levels of visceral fat in men (compared to women with similar BMI) could be the mediator of the reduced gray matter in high BMI men.

If you want to keep your brain’s gray matter (if you are a man), and your ability to plan and think at your best level then don’t become overweight (men and women). The general finding is not just for obese people (BMI 30+) but also for overweight people (BMI 25 - 29.9). Also being underweight (less than 18.5) is related to reduced cognitive ability. And all of these results are based on otherwise healthy individuals.

What is your BMI? go check it out here or here (metric).

You might not lose too many years of life due to being overweight (because of medical advances keeping your heart pumping) but you won’t be playing with a full deck upstairs - ouch!