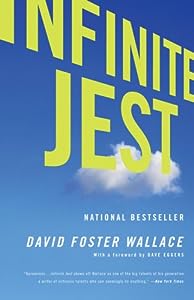 Infinite summer is a website that is a book club centered around reading David Foster Wallace’s ‘Infinite Jest” (IJ) (and search my blog for the other stuff I have written about DFW if you are interested).

I just wanted to share some of the pieces written about the reading of IJ:

My first read of the novel was by and large a pleasure. I’ll admit that there were moments when I wondered if I could trust Wallace to deliver the goods. And at that time, I thought that the book could have benefited from a sterner editor (although the submitted manuscript was apparently significantly longer.)

Still, I labored through the rough spots, and found more than enough to tickle me and keep me going. But while I don’t want to reveal too much, I will say that when I got to the end, my initial reaction was, “Huh.”

But what Marcus says about the novel after a  bit of time has passed since finishing it, is quite interesting.

Fast-forward two months and ten books, and here’s the thing—I was still thinking about Infinite Jest. In fact, I found myself seeing it more clearly, getting more seduced by it, than when I was actually reading the thing.

With distance what at first seemed sprawling begins to come into a more cohesive, if still massive, picture. Wallace is a writer who does not spare you the full force of his brain; in fact, he demands your effort like a brilliant professor who expects that you show up every week, well-rested, on time, and with the reading done.

But finish the book, let it stew, and it will all come together, I promise. And it’s more than worth the effort. So much so in fact, that about a year later I decided to read it again.

And I really thought Marcus captured something about the novel, that I also felt was  true, in this section.

Fundamentally, IJ is a novel about two things: the pursuit of happiness, and the impossibilities of communication. Wallace explores those themes and their intersections in a hundred different ways. And because he was a genius who didn’t believe there were answers to these questions, he also contradicts himself over and over and over. In fact, I’d be willing to bet that there are no assertions of importance in the text that aren’t contradicted somewhere else.

After a second read, there were many things I understood more clearly. And damn, how I loved it. But could I tell you, unequivocally, “what happened”?

There is also some interesting posts at the sister site of Infinite summer - which is called Infinite Zombies (part book club, part fight club, all infinite jest).

Just so you don’t feel alone about the daunting nature of this novel Daryl Houston shares this:

Usually what you hear about Infinite Jest is that it’s difficult and long and like climbing a mountain and dear sweet lord, those end notes and the esoteric information and the pages-long sentences and…

But then Daryl goes onto to say how encouraged he is by hearing how other readers and bloggers are finding that the ‘going’ is not so bad.

is really encouraging and exciting and even in a way validating. I’ve spent years being defensive about the book, even making pre-judgments about how well it would be received by some person or another and declining to recommend it from time to time on the basis of its difficulty. But reading my fellow bloggers’ comments and tracking #infsum on twitter is really invigorating for me, reminding me that, yes, there are parts of the book that are hard, and it’s a big investment to read the thing, but there’s so much reward too, so much humor and humanity and heart that even those doubtful about their chances of slogging all the way through it are finding it to be doable and maybe even likable.

Watching as people discover that reward in spite of (or because of) some of the difficulty helps me relive the wonderment of my own first reading (which wonderment I had sort of lost sight of). And in a weird way, it makes me proud. What exactly I’m proud of I can’t say. I suppose there’s a temptation, as an early appreciator, to feel like something of a pioneer, but that’s not the target (at least not the main one) of my pride. I can’t really be proud of the book, since it’s not something I had a hand in creating. And it’s presumptuous and a little silly to say that I’m proud of Wallace (though I guess I am). So I can’t put my finger on it. But every time I witness one of these little discoveries, I get a little catch in my chest, a little thrill, sometimes even a little shiver, and it makes me really glad to be playing along.

And finally here is an example of what Daryl was talking about as a new reader discovers Wallace’s IJ is accessible and it is not something to be scared about.

Here it is: I’m scared of this book.

I’ve heard it’s going to clobber me with its heft, it’s going to belittle what pitiful intelligence I thought I had with its towering erudition, it’s going to reduce my pathetic reading ability to the bitter taste of ash and failure by the ferocious power of its subtle complexity I could only pray to ever understand. I’m duly afraid, and I’m glad to read I’m not alone in feeling this way.

DFW is like the ultimate litmus test: have you heard of him? Have you read him? Have you channeled his inimitable writing style to demonstrate the power of post-post-modern American literature? All I knew about the book before I cracked the spine was that it was about tennis and drug addiction, and that Wallace was by all accounts a genius…

So imagine my surprise, then, when I start reading and it’s not bad. It’s not so opaque as to be incomprehensible, only opaque enough to be, you know, interesting. It’s funny. Sure, I’ve highlighted some parts. Dictionary.com may become my home page. But it’s…wow. It’s good. It’s readable. Is it possible that I might even like it?

I’m not even a tenth of the way finished yet, so I’m still a little scared. But I think now that if I do cry while reading, it won’t be because of my own literary incompetence. It will be because of – who would have guessed? – the power of Wallace’s prose. Even in my limited journey I have learned that all the elitist graduate students were right about one thing: Wallace was a genius, and there is no one else who can write quite like him.

Go give IJ a try.

I have talked several times on this blog about the writer David Foster Wallace (too busy to link). If you have any interest in this writer and/or his novel ‘Infinite Jest’ well maybe it is the perfect time to read his epic novel, because the infinite summer website is offering a great deal of help in reading this novel starting tomorrow - from June 21st to September 22nd (hence you will be able to complete the 1,000+ pages of this novel by reading 75 pages a week - 10-11 pages per day).

I can tell you reading the book is an ‘interesting experience’ based on my 2 journeys through it. I plan to start my 3rd, with everybody else, starting tomorrow.

There is all sorts of support, tips, tricks, Google calendar schedule, progress tracker app, flickr pool, guides and everything else at infinite summer - someone is even twittering the entire novel 140 characters at a time.

“Michael made some Infinite Summer bookmarks with the schedule printed right on them. We were totally going to do the same thing, but whatever we would have cooked up would have looked pretty lame compared to those.

In addition to creating a Google Calendar and iCal calendar for the I.S. schedule, James also says he’ll be blogging his reading of the novel at his website.

At Infinite Zombies, five six seven writers intend to chronicle their reading of the book in a format they describe as “part book club, part Fight Club“.

The Infinite Summer Ravelry group has hit 50 members. The Goodreads page has 87. The LiveJournal community continues to grow.

Bitch Ph.D says she’s on board. Marc says that, on June 21st, he’s going to turn his weblog into “my own journal of the Infinite Summer project/book club.” Kev and Emily are going to “post our gchat convos while we read infinite jest.

Katie is keeping track of her favorite DFW quotations of a Tumblelog. Someone is tweeting Infinite Jest 140 characters at a time on Twitter.

Meg is trying to talk her wedding guests into reading the novel so everyone will have something to talk about at the reception.”

Go give it a whirl - I think it should stimulate your brain - and hence brain health.