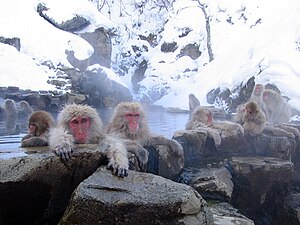 What is interesting though is that these novel environments also increase the stress response of these animals. Now normally we think of stress as being very bad for us. However, this is more typically true for chronic stress, and even more so when the organism has no control over the stress. But it appears now from a large number of studies that the right amount of stress at the right frequency is very beneficial to our brain health and our overall health.

In the near future I will return to this idea and give further details of what the researchers find. But the take home message for better brain health is keep exposing yourself to an enriched environment, keep learning and exploring new things (including maybeÂ  playing and swimming with your mates in a new pool as shown in the photo above

to your better brain health

← Resveratrol does not extend lifespan
How many neurons does a human brain have, and more importantly how many connections? →