Is the age of 30 the cut off for genius?

The great genius Einstein once said, “A person who has not made his great contribution to science before the age of 30 will never do so.” However, new research might prove the great Einstein wrong, and that nowadays more and more of the genius level accomplishment are not reached until far later in life. 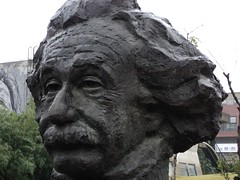 We have all read the pithy quotes about the power of youth. “Don’t trust anyone over 30,”: The mathematician G. H Hardy spoke of math being: a “young man’s game”, so anyone with a talent for mathematics should develop and use that talent while they are young, before their ability to create original mathematics starts to decline in middle age.

But we have all likely read great novels by authors well into their 50s. So really what is the age barrier for genius?

An additional problem with the idea that all genius level thinking can only be accomplished by the young is that this line of thinking is in somewhat contrast with the notion of the 10,000 hour rule (Anders Ericsson, Malcolm Gladwell), which suggest that to reach ‘mastery’ of a subject you need to put in 10,000 hours. Now 10,000 hours can be accumulated before the age of 30, but what about the various endeavours that are not even started until we are in our mid 20s – such as becoming a surgeon, or a scientist?

General physical and mental performance as we age

Previously I have discussed both physical performance changes the occur with aging, but also mental ability over our lifetimes, which surprisingly for many tasks does not peak until around the age of 53.  I also went into details of the potential underlying neurobiology behind this relatively late peak in mental performance for some tasks.

But some general cognitive function tests that might peak in many of us at 53 is not in the same category of what we think of a genius thinking.

A new study has found that the new peak is 48 years old. Turning the notion that genius level performance can only be accomplished by the young the research found the exact opposite results.

To investigate this notion further, researchers analyzed 525 Nobel Prizes given in physics, chemistry and medicine from 1901 to 2008. They compared how the age of peak creativity, measured by the average age at which Nobel laureates did their prize-winning work, varied between fields and changed over time within fields.

Today, the average age at which physicists do their Nobel Prize-winning work is 48. Very little breakthrough work is done by physicists under 30.

Why is there this total reversal of the popular notion that all great scientific work is done before middle age?

The growth in the knowledge base of each scientific field.

In our current knowledge explosion times it takes a person far longer to consume the field of knowledge of a particular subject matter compared to say 1905. As with all information, and maybe even more in the science fields, information is doubling every 18 or so months. So if you compare the information known about a particular field in 1905 to 2011, well there are orders of magnitude differences.

And you can see from the results of the study that in earlier times the peak ability did occur earlier.

The investigators found that great scientific achievement before age 30 was indeed common in all disciplines before 1905. About two-thirds of winners in these fields did their prize-winning work before age 40, and about 20 percent did it before 30.

Now a human can only consume so much information per day, and with the huge amount of information that has been published in all the different scientific fields, it is not possible for an individual to know everything in their field, and they probably knows a smaller percentage of their field compared to their compatriots from earlier times. And so even to get a reasonable accumulation of knowledge in a person chosen field of interest it takes a considerable amount of time.

So maybe the 10,000 hour rule is even more true in our current times, especially in information rich fields, such as the sciences.

A final quote from the article sums up things nicely:

“The image of the brilliant young scientist who makes critical breakthroughs in science is increasingly outdated, at least in these three disciplines,” Weinberg said. “Today, the average age at which physicists do their Nobel Prize-winning work is 48. Very little breakthrough work is done by physicists under 30.”

So if the peak is at 48 for physicists there has to be a bell like curve to this, suggesting that Nobel prize winning work is being done considerably past the age of 48. I would also be interested in a study examining what we typically think of more creative endeavours such as writing, painting and composing music.

Do you think you have reached your peak ability yet?

2 comments for “What is the age barrier to genius – Is it only accomplished by the young?”